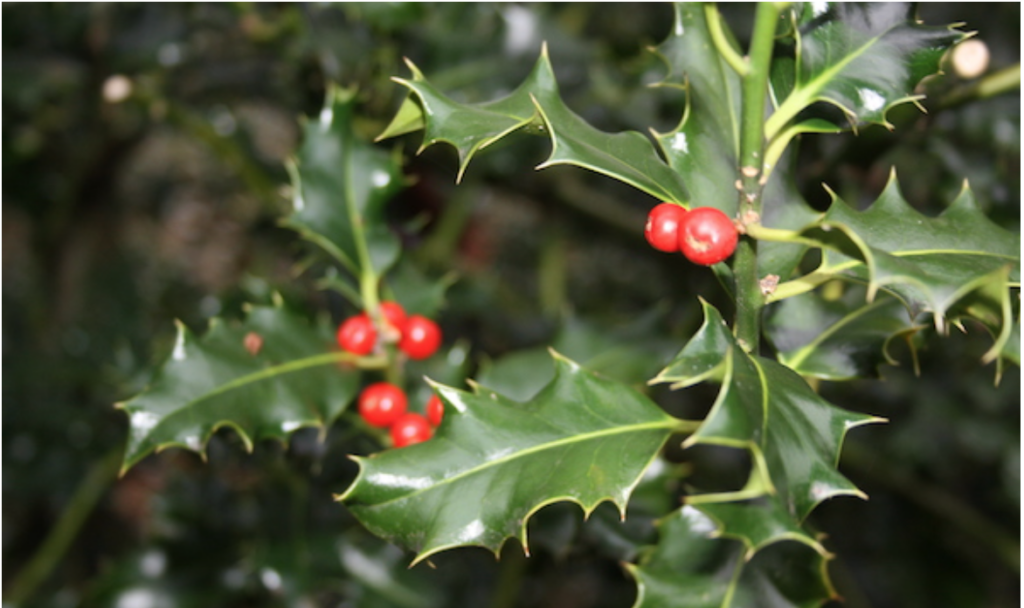 I hate holly more than PRP!

My house has holly bushes; too many holly bushes. Oh, how I hate holly bushes! But they look great from afar. Dark green. Lush green. But up close, they hurt. Let’s face it, holly is a mean-spirited plant. It’s a lot like PRP.

Every spring — with great reluctance — I remove the non-holly vegetation that creeps beneath those razor-sharp leaves. The non-holly undergrowth includes a dozen of what I call “baby trees” — each seeking their own place in the sun. Only a half-inch in diameter, I use pruning sheers to trim them down to ground level. It’s not that I’m too lazy to dig up each stalk by the roots, but rather, it’s too painful to spend any time whatsoever under the holly brushes. Holly is evil incarnate. Another similarity to PRP. It was early August 2012 when my days of doing yard work abruptly ended and with it the annual clearing of non-holly undergrowth. A red spot, the size of a dime, appeared on my forehead. The spot grew in size and spread everywhere. Three months later the diagnosis of seborrheic dermatitis was abandoned and I was properly re-diagnosed as PRP. I began treatment at the University of Texas Southwestern built around a protocol that included acitretin, triamcinolone, Clobetasol and Desonide and other meds for pain, itching and sleep. Remission was not on my radar. PRP was winning. By August 2013, I was mercifully on the road to remission. My acitretin was still at 50 mg per day, but would soon be lowered to 25 mg. By November the prescription would not be refilled. I could see the road sign: “Remission Ahead”. As we say: “A tincture of time and a dash of hope.”

By August 2014, I had been “in remission” for four months with no visible symptoms and no meds. It was a time to put PRP behind me and look to the future. Anything was possible. I wanted my life back. I wanted to smile again. I did.

By August 2015, I told myself I wanted to get back to working in my yard. However, the sun and Texas heat were an insurmountable deterrent. Instead, I invested my time in PRP advocacy. I attended dermatology conferences in Vancouver, Canada and Copenhagen, Denmark and helped launch the International Alliance of Dermatology Patient Organization (IADPO). There was time and energy to lobby on Capitol Hill with other dermatology patient advocates during the American Academy of Dermatology Association’s annual Legislative Conference in Washington DC. I even attended the AAD Annual Meeting in San Francisco. Remission wasn’t a bad place to be if you wanted to continue the fight against PRP.

By August 2016, even though I had lost muscle mass and stamina during my 20-month bout with PRP, I was feeling like yard work was a real possibility. But it was easy to stay focused on advocacy and with it, more international travel — this time to Vienna and the 25th European Association of Dermatology and Venereology Congress. For me, remission brought with it a responsibility to stay engaged.

By August 2017 and five years since the red dot appeared, I attended the AAD Annual Meeting in Orlando, FL. As a founding director of IADPO and chair of their 2017 GlobalSkin Conference, it was off to Geneva, Switzerland in September. Most of my time, however, is spent building the PRP Survival Guide,

Back to the holly…

It was the Summer of 2018 in North Texas when I decided it was time to resurrect my pruning sheers and work in the yard. It was hot, in the 90s.

As I approached the holly bushes I was struck by the height of the tree that had been growing unattended since 2012. I could no longer ignore the tree that was reaching to the sky, it’s limbs pushed again the rain gutters and roof. As I recalled my PRP journey over the past five years.

I took my saw and with great delight, cut down an 18-foot tree that had chronicled my PRP journey with growth marks. (See image). I’m not sure if it is an insignificant point of interest or just damn spooky, but the five years I was “active” PRP (2012 and 2013) are dark.

The moral of this tale — if a moral be appropriate — is that PRP is a journey that challenges the body, mind and spirit. How we travel on that road, the people we meet and the relationships we develop are all part of that journey. We travel best when we travel together as a group of kindred spirits. We care. We share. We learn from each other.

One day I’m going to dig up all the god damn holly bushes in my yard. Like I said, I hate holly more than PRP. It is 2021 and as far as PRP is concerned,  I am still symptom-free and med-free. Of course I turned 75 this year, my type 2 diabetes is a never ending challenge and I am taking Xarelto to thwart the return of blot clots. Add to that the fact that my wife and are are now legal guardians of our eight-year-old granddaughter — both a challenge and a joy.  Still, I take great comfort in the fact that  I am a PRP “Remissioner” and able to stay engaged with the PRP Global community.